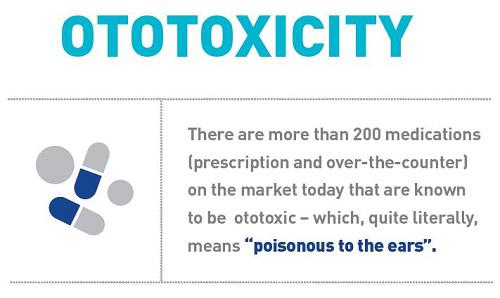 In the lists that follow, the generic name of the drug is given first, with the trade name, if available, followed in parentheses and capitalized. Many times a particular generic drug is manufactured under several trade names.

Drugs that can cause hearing loss

(These are usually ototoxic when given intravenously for acute kidney failure. Rare cases of ototoxicity have been found when these medications are taken orally in high doses by people with chronic kidney disease.)

(Most NSAIDS have the potential for causing hearing loss and / or tinnitus. Because new drugs are being frequently approved for use, it is important that you check with your doctor or pharmacist to determine if the drug you were prescribed can cause a problem.)

(Toxic effects are close related and are almost always reversible once medications are discontinued.)

(Of particular interest is that topical ear drop medications containing gentamycin or neomycin do not appear to be ototoxic in humans unless the tympanic membrane (ear drum) is perforated. When a solution of an aminoglycoside antibiotic is used on the skin together with an aminoglycoside antibiotic used intravenously, there is a risk of an increase of ototoxic effect, especially if the solution is used on a wound that is open or new, or if the patient has underlying kidney damage. Neomycin is the drug that is most toxic to the structure involved in hearing, the cochlea, so it is recommended for topical use only. But even topical therapy has resulted in hearing loss when large areas were treated which allowed for large amounts of the drug to be absorbed into the body. Hearing loss caused by this class of antibiotics is usually permanent.)
Erythromycin

(Usually ototoxic when given in intravenous doses of 2-4 grams per 24 hours, especially if there is underlying kidney failure.)

(The ototoxic effects can be minimized by carefully monitoring blood levels.)

(The ototoxic effects are very similar to those of aspirin.)